Lighthouses of the Great Lakes

Lighthouses are a lot like land line telephones. Do they still have a function if need be? Sure. Are there better ways to get the job done? Oh yeah. But in these days of nostalgic analog everything (see: vinyl records making a comeback) lighthouses are still cool. They conjour memories of a different era and often call to mind the romance of the open water and ships making their way with lonely lighthouse keepers maintaining a dutiful watch, ensuring the lamp is lit. In fact, they are SO cool that many are still standing despite their obsolescence and some are open to the public for you to visit!

According to the National Park Service, a lighthouse is a tower with a bright light at the top, located at an important or dangerous place regarding navigation (travel over water). The two main purposes of a lighthouse are to serve as a navigational aid and to warn boats of a dangerous area. Think: a rock outcropping or island in the middle of a river or channel. If you’re piloting a ship you know that the light you’re seeing is coming from land and you should avoid it. Similarly you can use these lighthouses as points of reference to determine where you are on your journey and plot your course accordingly. The lens the light passed through on top rotated to cover the open water before it. By having it rotate, it appears as though the light from the lighthouse was blinking and therefore grabbed your eye more readily. This was important as their signal could be seen for great distances across open water. But how can a lighthouse project a light MILES into open water? Two words: Fresnel Lens. The Fresnel Lens is a giant piece of very intricate glass that is located at the top of every lighthouse. It’s purpose is to concentrate the light from a lamp at its center into a very focused, powerful beam that can be seen for miles across the water. It’s named after French physicist  Augustin-Jean Fresnel who invented it in the 19th century. It’s design was quickly adapted for use in lighthouses because of it’s relative light weight and cost. The lens uses concentric rings of ridged glass that helps focus the light from the lamp at the center of the lens into a parallel beam that can be seen up to 20 miles away!

Beyond function, lighthouses are some of those most unique buildings you can see. Their tall towers with bright lights at the top are instantly recognizable and make for great vistas and photo opportunities. Being in the Great Lakes we have a varitable cornucopia of lighthouses that you can see and even some you can visit and go inside! Lake Superior is home to 78 lighthouses, 42 of which are located in Michigan. There are many that are still functioning and many that you can visit and tour.

Check out the Au Sable Lighthouse which offers guided tours from the National Park Service from June through September. Contact them before you go to see how COVID has impacted these tours. 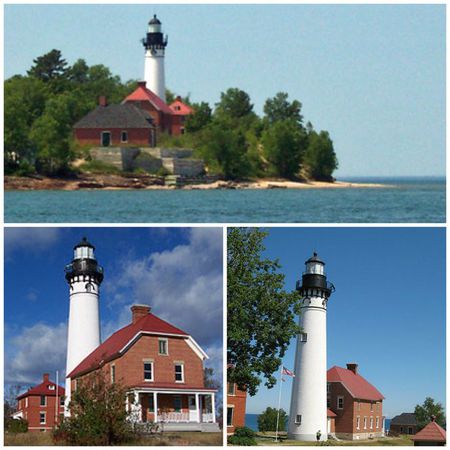 Another notable lighthouse on Lake Superior is the Whitefish Point Light Station. The famous freighter Edmund Fitzgerald went down just beyond Whitefish Point. Lake Michigan is home to 102 Lighthouses! You can find them in each state bordering the lake, ensuring you’re never far from one of these beauties.

Check out the Grand Traverse Lighthouse, built in 1852 and open to the public since 1986.

If you’re in Wisconsin, check out the Cana Island Lighthouse. It was the tallest building in the state when it was built, and today the public can climb to the top of its tower for stunning views. Bring the camera for this one.

Lake Erie is home to numerous lighthouses although not as many as the bigger lakes.

An interesting lighthouse is located at Fairport Harbor. The lighthouse was purchased in 2011 and converted to a private residence (it should be noted they no longer have to tend to the tower to ensure the safe passage of vessels at night). 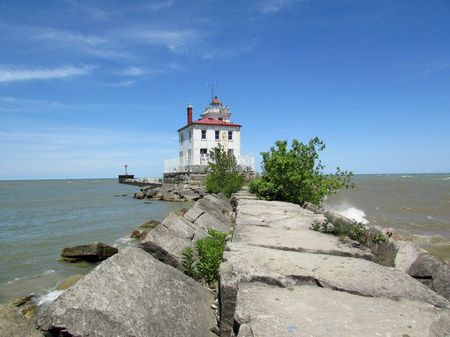 Another notable lighthouse is the Dunkirk Lighthouse, where numerous shipwrecks are located in the waters nearby which makes one question its effectiveness. A historical tidbit is that the first shot of the war of 1812 was fired nearby. Lake Huron is home to 98 lighthouses and it’s easy to see why given it’s shape.

Visit the Old Mackinac Point lighthouse located next to the Mackinac Bridge. The lighthouse offers tower tours and a program called “Shipwrecks of the Straits.” 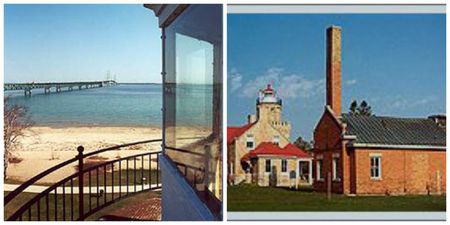 Another lighthouse to visit on Lake Huron is the Sturgeon Point Lighthouse which is still in full operation. The keeper’s house, however, has been converted into a museum. This offers the best of both worlds: a close look at a still functioning lighthouse as well as a visitor-friendly museum inside. Lake Ontario has 53 lighthouses with a high concentration on the St. Lawrence river!

Visit the Fort Niagra Lighthouse where the British erected what they considered to be the first lit navigation for ships on a stone pedestal on top of Fort Niagra. That light was removed in 1806. Now its home to a lighthouse tower that’s a spry 148 years old. 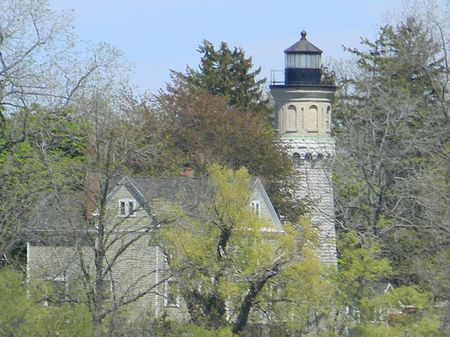 The Tibbets Point Lighthouse tower was built in 1854 (the current one at least) but what’s most interesting is that the former Keeper’s quarters are now a youth hostel.

All maps courtesy of the Great Lakes Lighthouse Keepers Association.